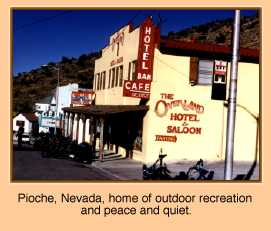 he anticipation is over and the Utah desert is under my feet. All I have to do is drive 20 miles down a hard pack road and Im in the Wheeler Amphitheater — trilobite heaven. The weather is perfect — September blue skies, temperatures peaking in the mid-70s. It is hard to believe flooding rains impacted the area for the last 3 weeks. As I am driving, I notice the desert to my left is now a lake. Just a few of the taller bushes breach the waters surface, on which swim thousands of ducks. In the middle of this desert lake amidst the ducks is a cow — all four legs pointing straight up into the sky. I continue on, unsure if this is an omen for the next 2 weeks.

Unpaved roads are generally pretty good in the desert, often better than Ohios paved roads. Now and then these hardpack roads dip down into and through washes, low areas in which water flows during a rain. With the recent copious rainfall, these washes had run so high and hard they eroded and turned the casual dips into instant foot-deep drops of 30-foot sections containing large knife-edged rocks instead of the usual dust and gravel. Road graders were out in force, smoothing the rough spots, exposing even more fresh, sharp rock.

With this knowledge, it is easy to understand that I had a major tire blowout before I arrived at my first dig site destination. By the time I stopped the Ford Explorer, all that was left of the tire was the rim. Luckily, this rental had a full-size spare tire, but with no spare spares as insurance, I was a bit nervous about travelling too much on these roads, so I altered plans and chose a couple collecting sites within easy reach of the main road.

The next morning with arrangements made to get the tire replaced, I left my motel to drive to the tire shop. To my surprise the truck had 2 more flats while sitting overnight in the parking lot. The tire company came out and eventually had me on my way; by noon I was back to the House Range. Secure (I use this word loosely) with a spare tire on board, I reached the location I planned for the past year to dig.

The site is in the middle of nowhere, in a very flat segment of the desert, yielding the beautiful red Marjum Shale and its rare trilobites. I found an inviting old pit, cleaned out all the loose shale and dirt and began to excavate, examining one piece of shale at a time for a telltale lump that may be a trilobite. (Only occasionally will a trilobite split out on the shale surface, and these usually are not as high quality as those that are buried.)

This pit was about 4 feet deep, thus while sitting I could not see the desert floor. Laboring in the desert silence, I heard a noise, not identifiable as to source or direction. Hearing it again, I looked up. Standing at the edge of the pit were two pronghorn antelope, not 6 feet away from me! Deciding I was harmless, the antelope watched me for a while, nibbled on grass, and eventually slowly meandered off into the horizon.

I settled back down in the pit to begin work on a new section. My arm tickled. I looked over and connected to my arm was a double strand of webbing on which resided an arachnid that strongly resembled a black widow spider. I cannot verify its true identity, for it left the vicinity of the pit very quickly with a lightning-fast swipe of my other hand. Without further incident, I did manage to find one nice Modocia typicalis, along with several Bolaspidella contracta, an unidentified phyllocarid, and a few different species of agnostid trilobites.

The next day I headed for another locality. Due to a major road washout, I had to park the truck, then hike about 2 miles up a mountain. The hike was worth it, however. The scenery was incredible, the insects plentiful and musical, many kinds of birds flew about, and oh yes, trilobites abounded. After digging for awhile, I decided to explore for any new exposures further up the mountain. The rains really gouged out the mountain, but I found no shale exposures. Travelling down the mountain, returning to my dig site, I travelled through a new wash, cut out at a comfortable angle for walking. My eyes and mind lost in blissful relaxation, I stepped onto a soft spot unlike the expected solid rock surface. I never had a chance to look down. The sound emanating from my feet levitated my body 6 feet back up the mountain! Where I was standing a moment ago was a 5-foot long rattlesnake, somewhat perturbed that somebody would consider stepping on him. We both stared at each other for a few moments, and he decided to go under a rock where he could get uninterrupted peace and quiet.

Having had enough excitement in Utah, I headed for Nevada. I stayed in Pioche, a town steeped with a history of mining wars, shootouts, and other Wild West stories. I booked a room at a motel/saloon and walked out to find some dinner as motorcycle group pulled into town, directly in front of me and the motel. The 100+ bikers swarmed the sidewalks and saloon, some began drag racing up and down Main Street. I smiled to each biker as I strode past them, aware that they possessed no desire to taint their reputations by associating with a rogue fossil collector. My truck, parked along the side of the motel, was now completely surrounded by parked motorcycles. As the evening progressed into night, the group got rowdier, drag racing continued at a fevered pitch, drunkenness was the general rule, and I felt pretty uncomfortable about the entire situation. 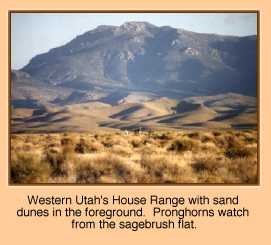 Hoping for the best, I left my truck where it was, headed for my motel room, smiling to the crowd and nodding in joyful greeting as I passed through, locked my door, and stayed out of the way. Law enforcement came in, but gave up trying to control the gang. Drag racing, the sounds of breaking glass, screaming, and general mayhem continued. I readied the rental car agency phone number, knowing Id need a replacement by morning. Quiet finally reined in around 3:30 am. I couldnt sleep anyway, so I packed my stuff and decided to get an early start to the day. The town was trashed. Paper, broken glass, items of unknown use lay everywhere. Cars parked on the street were splattered with beer, covered with cups and other debris. As I reluctantly turned the corner to where I was parked, motorcycles to either side, my truck was as clean and untouched as when I arrived! I pulled out of town, and laughed when I saw the sign posted at the town limits: “Welcome to Pioche, home of outdoor recreation and peace and quiet.”

On the way back to Utah, I decided to check out a white streak visible on a nearby mountain in hopes that it was a brand new shale exposure. I parked the truck and began my 3-mile hike to the foot of the mountain. The ground was littered with bones. Sheep bones. Everywhere I stepped there were sheep bones. Obviously a terrible tragedy occurred here sometime ago and an entire herd was lost. Amidst the bones were countless tiny holes about an inch or two wide. I never did see what made these holes, but I assume it was some sort of ground squirrel.

My white layer on the mountain was nothing but a white powdery mineral (gypsum?), so I headed back to the truck when I came upon a huge pile of dirt. It was as tall as I am and 5 feet across. As I approached the mound, I noticed a large hole on the opposite side, just below the peak. It looked just like an oversized midwestern groundhog hole. Standing alongside the mound, I bent over and looked inside the hole, my face virtually inside the entrance. I cannot say for sure, but I think the badger that was sitting there was as surprised as I was! After a look of astonishment, it curled its lips and growled, and the next thing I remember, I was running a full sprint towards the truck! (Reader, please take note: If you stick your head into a badger hole complete with badger, under no circumstance tell your friends who live in the Southwest. They tend to introduce you to new folks (amid a great deal of hearty laughter) by saying, “This is the guy I told you about who stuck his head into the badger hole.”)

Later that same day, after collecting a few easy to reach spots, the weather began to look nasty. Several storms were travelling through the desert and seemed to be zeroing in on me. I packed up, heading down the road with the storms close behind. What a particularly bad time to blow another tire! I am still amazed how quickly I managed to change that tire. I think my badger-induced adrenalin flow was still in force.

Yes, I did find many wonderful trilobites and other fossils on this trip. But I must say — most of the memories from this collecting experience did not directly involve fossils. When I arrived home, my guardian angel most assuredly had to take a long, long vacation!