What is a cycad?

Cycads are plants which are often confused with ferns or palms, but are closely related to neither. It is easy to see why the mix-up arises. Tree ferns, palms, and cycads all have a central trunk topped by a whorl of leaves, usually without any side branches. The leaves of cycads, many ferns, and many palms have a central stalk or rachis flanked by rows of narrow leaflets on both sides. But these similarities are deceptive.

When it is time to reproduce, each group has its own distinctive way of doing so: ferns bear spores on the undersides of their leaflets (occasionally only on a few specialized leaves); palms bear flowers which, when fertilized, set seeds such as dates and coconuts; and cycads produce cones in the center of the leaf whorl, with male and female cones occurring on separate plants. Because their seeds are borne in cones, the closest living relatives of cycads are evergreen coniferous trees like pines, spruces, and firs.

Cycads and their relatives, mainly conifers and the Chinese ginkgo, collectively are called gymnosperms, which means “naked seed”. This refers to the fact that no fruit, or structure formed from part of a flower called an ovary, surrounds the gymnosperm seed. There is sometimes a fleshy seed coat, but in botanical terms it is formed differently than a fruit is; a gymnosperm bears a cone, but never a true flower.

The angiosperms or flowering plants evolved later in time than the gymnosperms, and are considered the most advanced types in the plant kingdom. Cycads were more common than they are now during the Triassic and Jurassic periods (about 245 to 140 million years ago), before the flowering plants appeared. This is why cycads are sometimes referred to as “living fossils”, but the term could really be just as accurately applied to a pine tree.

The fossil record of cycads

Strictly speaking, most fossil cycads are called cycadeoids and are classified scientifically in the order Bennettitales, while all living cycads and a minor number of extinct ones are called true cycads and placed in the order Cycadales. The main difference is that while the cones of true cycads are always borne at the top of the trunk, in the center of the leaf whorl, cycadeoids bore their cones in the leaf axils (where a single leaf joins the trunk). There are also differences in the type of stomata or respiratory pores on the undersides of the leaves. Further discussion of the differences is beyond the scope of this article. I will follow the nomenclature of Wieland and call them all cycads.

Fossilization occurs when the plant is buried and minerals dissolved in the groundwater, over millions of years, replace the original plant tissues. Fossilized cycads may occur as leaves or trunks. The trunks somewhat resemble overgrown pineapples turned to stone because of the armor of old leaf bases which protected them in life. Leaves are usually found as carbonized impressions in the rock. The South Dakota School of Mines Museum in Rapid City has a very nice collection of fossil cycads. 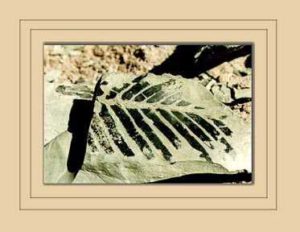 The Jurassic Period is sometimes called the “Age of Cycads” because they were so common then. Cycads probably were eaten by some of the herbivorous dinosaurs, such as Stegosaurus, the Colorado State Fossil. Petrified cycads are frequently found in the same rocks as dinosaur bones.

Obviously, in past times the climate was much different than it is now, because modern cycads are restricted to the tropical and subtropical regions of the world, and a few temperate locations with mild winters. In general, they are not tolerant of freezing temperatures.

Fossil cycads can thus be used as indicators of past climates. Greenland and Antarctica must, at one time, have had much milder weather than they do now. In fact, much geological evidence indicates that this was so. The theory of plate tectonics tells us that the continents have not always had their present positions on the earths surface. They drift about on the earths liquid interior like so many logs frozen in slabs of river ice.

During the time when cycads have existed (since the Permian), most of the difference in climate can be accounted for not by Greenland and Antarctica having been located nearer to the equator, but by changes in the pattern of ocean currents brought about by altered continental positions. The ancient ocean circulation regime transported more of the suns heat from the equatorial to the polar regions, resulting in a more uniform world climate than exists today. There were no high latitude glaciers between 250 and 30 million years ago.

The most famous fossil cycad locality in the United States is near Minnekahta, in the Black Hills of South Dakota. An entire fossil forest of cycads used to exist there, and many specimens were dug up and sent to museums around the world during the last century. At one time, the U. S. government even designated the area Fossil Cycad National Monument. However, vandalism and illegal collecting have denuded the area so badly that it has been closed as a national monument.

Cycads today are represented by over 100 species assigned to 11 genera. They inhabit the tropical and subtropical regions of the world, and a few grow in temperate regions that experience only mild winters. Some cycads grow in moist areas and in dense forests, while others are found in exposed places and in semidesert regions. Although they can be locally quite abundant, all species of cycads are endangered (mostly due to habitat destruction and overcollecting) and are covered by the import/export restrictions of the Convention on International Trade in Endangered Species (CITES).

The genera Dioon, Zamia, Ceratozamia, Microcycas, and Chigua are confined to the New World, where they are found from Mexico to Chile; one species of Zamia is native to south Florida, the only cycad which is endemic to the United States. Encephalartos and Stangeria are found only in Africa. Bowenia, Macrozamia, and Lepidozamia are restricted to Australia, while the genus Cycas ranges from Australia to Japan. Many cycads are grown as landscape plants outside of their native regions. In this country, they are popular with gardeners in California, southern Arizona, and the Gulf coast states. In colder areas, small ones may be grown as houseplants.

Many botanical gardens have cycad plantings, either outdoors where the winters are mild, or in a conservatory where they are not. The Denver Botanic Garden has a small but respectable collection including some African and southeast Asian forms. Lincoln Park Conservatory in Chicago, the University of Michigan Matthai Botanical Garden in Ann Arbor, the Missouri Botanical Garden in St. Louis, and the Conservatory at Golden Gate Park in San Francisco all have nice indoor collections, to name a few.

The best places in the United States to see cycads are the Fairchild Tropical Garden in Miami, Florida and the Huntington Gardens in Pasadena, California. Both have extensive outdoor plantings of cycads from around the world. If you visit Kew Gardens outside London, England, dont miss the rare Encephalartos woodii specimen, a species which is totally extinct in the wild.

The basic anatomy of a cycad consists of a trunk, which may be underground or aboveground depending on the species; roots; a whorl of leaves; and one or more cones, if the plant is mature and in season. Root nodules called coralloids form near the surface of the soil and harbor a type of bacteria which fixes nitrogen for the plant — hence the cycad, in effect, makes its own fertilizer. Most plants lack such an arrangement, and must rely on external sources of fertilizer, such as animal dung. This nitrogen-fixing ability allows the cycad to grow in very poor soil.

Male and female cones are borne on separate plants, and pollination is via insects or the wind, depending on species. Seeds range in size from no bigger than a pea in some cycads to as big as a goose egg in others. One African species bears cones which may weigh as much as ninety pounds! The seeds are often harvested by birds, small mammals, and baboons, who frequently eat the fleshy seed coat and then drop the hard seeds themselves some distance away from the mother plant. This is how the cycads expand their range and avoid overcrowding.

Aside from their value as landscape plants, cycad leaves are popular today for funeral wreaths and Palm Sunday arrangements because they stay green and fresh-looking long after they have been cut from the plant. Native peoples have made foodstuffs from cycads for centuries, but Western man has learned some hard lessons when trying to exploit cycads for nutrition while ignoring traditional methods of preparation.

The leaves and stems of many cycads contain poisonous chemicals (neurotoxins or nerve poisons) which must first be removed before the plant can be used for food. In Australia, the introduction of cattle ranching during the last century was unfortunate for the native Macrozamias: cows would eat the leaves of the cycad, and develop a paralysis of their rear legs. Unable to walk, they would then starve to death. The Australian government for many years subsidized a program to poison the cycads and thus remove the threat to cattle. Happily, this is no longer in effect.

Many aboriginal peoples make a bread out of the starch from the interior of the stems of cycads, hence the local names “Hottentot bread” and “sago palm” (a misnomer, since it is a cycad, not a palm). Native Africans remove the starchy pith from the trunk, and bury it in the ground for two months while it ages and the poisons are deactivated. The Seminole Indians of Florida and the South Pacific Islanders repeatedly soak the starch in water to leach out the toxins. A palatable bread can then be safely baked from the starch.

Not knowing the importance of removing the poisons, several Civil War soldiers died after eating bread they made from unprepared cycad starch. When Westerners colonized some of the South Pacific islands after World War II, their lack of attention to native methods of preparation of cycad bread caused an epidemic of neurological poisonings which, while not fatal, mimicked the symptoms of Alzheimers disease (loss of memory and general mental deterioration).

The seeds of the Mexican cycad Dioon are edible and are an important source of nutrition for some of the indigenous peoples. The nut shells are also sometimes drilled through and strung like beads to make childrens toys. The large seeds of some cycads have occasionally been sawed and hinged to make unusual matchboxes.

Four thousand years ago, the Etruscans of Italy used fossilized cycad trunks as funeral monuments, placing them atop their tombs. Coal miners in the eastern United States used to find fossilized trunks and take them home to use as doorstops and good luck charms.

Although they are fascinating plants, most people have never heard of a cycad, much less know anything of its 250 million year history or its important place in todays world. This article has been a success if it has taught you a little something about cycads and maybe even interested you to learn more.