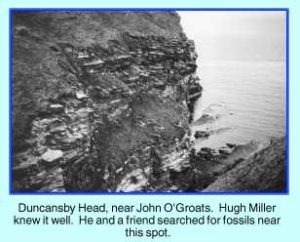 In a time when the whole fossil record was starting to make sense to science, Hugh Miller was a famous voice in paleontology. Miller was a stonemason and accountant from a long line of sea captains. He never acquired a formal college education, yet his discoveries of fossil fish and sea scorpions bear his name. There is even a mountain in Glacier Bay National Park, Alaska, named for him.

Nowadays, we of the 20th and the 21st centuries are lucky to have many paleontologists writing for popular audiences. In the mid-1850s, Hugh Miller was one of a half-dozen such authors. He also illustrated his work with accurate, sometimes color etchings of the fishes and their skeletal components. We are accustomed to thinking that paleontological art of that time was fanciful. What usually comes to mind is the surreal landscape seen in Bucklands famous Victorian representation of a battle between a plesiosaur and an ichthyosaur in a lagoon of the Lias (Jurassic).

Hugh Millers art was far different. He had the eye of a serious investigator and the mind of a novelist. He not only excavated new fossil fishes from strata dismissed by geologists as non-fossiliferous, he wrote about them and their geologic context in a readable style. Unlike most contemporary work, Millers writing was dramatic without being wordy. He used familiar objects to describe unfamiliar subjects. In describing the Devonian Old Red Sandstone strata of his native Scotland, he says it thusly: “I am particular, at the risk, I am afraid, of being tedious, in thus describing the Geology of this northern county (Caithness), and of the Cromarty section, which represents and elucidates it.

They illustrate more than the formations of two insulated districts. They represent also a vast period of time in the history of the globe. The pyramid, with its three huge bars (referring to the way the formation is laid out across Scotland), its foundations of granitic rock, its base of red conglomerate, its central band of dark-colored schist, and its lighter tinted apex of sandstone, is inscribed from bottom to top, like an Egyptian obelisk, with a historical record. The upper and lower sections treat of tempests and currents — the middle is written within and without with wonderful narratives of animal life; and yet the whole, taken together, comprises but an earlier portion of that chronicle of existences and events furnished by the Old Red Sandstone.

It is, however, with this earlier portion that my acquaintance is most minute…the fossils are remarkably numerous, and in a state of high preservation. I have a hundred solid proofs by which to establish the truth of the assertion, within less than a yard of me. Half my closet walls are covered with the peculiar fossils of the Lower Old Red Sandstone; and certainly a stranger assemblage of forms have rarely been grouped together; creatures whose very type is lost, fantastic and uncouth, and which puzzle the naturalist to assign them even their class; — boat-like animals, furnished with oars and a rudder; — fish plated over, like the tortoise, above and below, with a strong armor of bone, and furnished with but one solitary rudder-like fin; other fish less equivocal in their form, but with the membranes of their fins thickly covered with scales; — creatures bristling over with thorns; others glistening in an enamelled coat, as if beautifully japanned — the tail, in every instance among the less equivocal shapes, formed not equally, as in existing fish, on each side of the vertebral column, but chiefly on the lower side — the column sending out its diminished vertebrae to the extreme termination of the fin. All the forms testify of a remote antiquity — of a period whose fashions have passed away.”

Millers nickname amongst scientists and publishers was “Old Red.” He was appropriately named, for he had abundant, unruly red hair. Hugh Miller was a big man, tall and husky, who spent as much of his time outdoors as his later work permitted. He grew up along the seashore, on the Old Red Sandstone.

The formation lies conformably (in strata neatly layered atop older formations) below the Mississippian (“Lower Carboniferous” in European nomenclature). The Old Red Sandstone is exposed at or near the surface of the landscape as far south as the Firth of Clyde, and, along its northern extent, the coast of Caithness. It is interrupted along the Aberdeenshire coast, only to reappear at Banff County along the coast of the Moray Firth.

Then it runs into the great Caledonian valley and from there along the shores of Ross and Cromarty and Sutherland. One can also see it at Herefordshire and Forfarshire, where it is thousands of feet thick. It consists of three principal masses: red and mottled marls with impure limestone and sandstone; conglomerate; and a finely laminated quartzose sandstone. The formation was originally freshwater and estuarine delta sediments. It had been described by Sir Roderick Murchison some years earlier. Hugh Miller would make it famous.

Miller quit school at the age of seventeen after having been struck about the ears one too many times by his teacher for not correctly spelling words aloud by pronouncing each syllable. Millers uncles, who helped raise him after his father drowned in a storm, objected to this. They rightly felt that he was throwing away his future. As a captains son, he belonged to a higher-level caste. Miller took a job as a stonemason and stayed with it for over ten years, mostly because during slack months he could explore the Scottish countryside. He began to find odd winged fish and sea scorpions in the rocks. Few of his countrymen had ever taken much interest in such matters, although they, too, had seen these same fossils. In 1834, the silica dust from the quarries started to harm Millers lungs, so he left the trade and went to work in a bank. He was now in his early 30s.

It was settling-down time, and so Miller married childrens book author Lydia Fraser and started a family. His first book, Scenes and Legends of the North of Scotland, was a big success. Geologist Sir Roderick Murchison read the geology chapter of this bestseller with interest and soon the two were correspondents. It was during this time that Miller became involved in a political controversy involving the Church of Scotland and its patronage. His strong pro-Presbyterian sentiments and activism led him to accept editorship of The Witness, the Edinburgh non-intrusion party newspaper. The family moved to the “big city.” Here Miller met some prominent scientists at a conference of the British Association for the Advancement of Science. Louis Agassiz was at that conference, and Miller knew he could help him identify the fishes he was excavating in the Old Red Sandstone. The Swiss scientist had no peer as an authority on fossil fishes. These finds of Millers were quite new to science, and as a result of Millers donation of the specimens, Agassiz named them for either himself or for Miller.

The Pterichthys milleri Agassiz was a six-inch long antiarch, or armored fish. It was a member of a prominent fish order of the middle Devonian, about 275 million years ago. Its mouth was located under its head and thus the fish was probably a scavenger. The front fins looked like wings, hence the name. Late Devonian ray-finned fishes included the Glyptolepis and Asterolepis. They boasted a number of ecological advantages. For one, the bones corresponding to those of the cheek in mammals were flexible, allowing more water to pass over the gills. For another, the upper lobe of the tail fin was stiffened by a new kind of bone that helped the fish swim faster and more accurately.

Miller found, but did not discover, Dipterus, a Devonian lungfish, part of the line that led to amphibians.

The Old Red Sandstone was Millers next book, followed by Foot-Prints of the Creator; Or, The Asterolepis of Stromness (1847). This work discussed fossil fish anatomy and how that anatomy failed to substantiate the “development hypothesis” propounded by an anonymous author. That author was in fact Robert Chambers and the hypothesis was an early evolutionary theory. Paradoxically, though Miller was opposed to all such hypotheses, he did think that families and orders can degrade if they have been in existence for many millions of years. He also believed, as did most scientists of the time, that the fossil record represented a series of separate special creations and subsequent mass extinctions. It was an exciting time for the paleontological realm, and Darwins Origin of Species was on the way.

Unfortunately, Hugh Miller died in 1856. For most of that year, the brilliant researcher and speaker had been bothered by terrible headaches that seemed to burn inside his head. Had he lived in the 20th century, Millers doctors could have diagnosed the problem. Perhaps it was a tumor that caused the headaches, and later, the awful hallucinations. Alas, Victorian-era medicine could not help. He feared that he might harm his wife or children during his delusions in which he pursued imaginary robbers with his gun. Miller committed suicide the night he finished checking printers proofs for his book on Scottish fossil plants and vertebrates, The Testimony of the Rocks.

A shocked Western world mourned him, and his funeral procession was among the largest in the memory of Edinburgh residents.

Millers death was very tragic, and his life brief, but he left a heritage of new discoveries of several Silurian sea scorpions, and many Devonian fishes, intriguingly described in his popular books. Though he had no academic credentials, he is today considered one of Scotlands premier paleontologists.