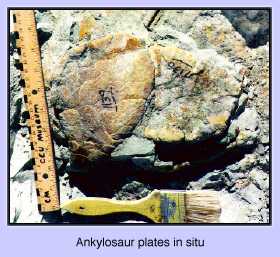 Just after dawn, I plodded up the trail to the throne with my camping shovel. The shovel was unnecessary except for my peace of mind. I, mighty hunter of long-dead dinosaurs, had heard coyotes howl outside my tent, and the shovel was like the jawbone of an ass — defensive armament against any canine Philistines that might choose to block my path. I shouldnt have worried. Not even a lizard contested my ascent. And, more importantly, the stick which determined possession of the throne was in the prone, or “unoccupied,” position next to a prominent rock outcrop alongside the trail.

The throne soon appeared before me, an unassuming, waist-high platform erected over a pit and crowned with a pink toilet seat. For modesty’s sake, it was placed behind a large, sandstone boulder. Someone built it with one-size-fits-all in mind, making it a bit large for me and reminding me of my innocent youth in Ypsilanti, Michigan.

Ah, but the view was grand.

All but the most megalomaniac of kings would have killed a herd of fatted calves for the view: a marble-cake desert valley of brownish-red sandstones and gray mudstones stained with green washes of rabbit brush, yucca, and Mormon tea. Spread across the western horizon, spires and arches carved out of Entrada sandstone glowed with warm, russet, beach-sand swirls placed there some 130 million years ago. These rocks formed a true Valley of Kings because they housed a necropolis of once mighty dinosaurs that I would soon explore along the margins of the mesa top a short walk away.

Dinosaurs occupied a metaphorical throne of dominance on earth for 160 million years or so. They weathered a couple of major extinction events during the Mesozoic — an entire geological era in which they were the prime players in Earths ecology. They finally succumbed to a confluence of disasters that included a series of volcanic eruptions on the future Indian subcontinent, the retreat of a vast inland sea that split North America, and the arrival of one or several Manhattan-sized rocks whose impact and fallout severely compromised their well-being. But their long tenure on the planet left many bones — and sometimes, appropriately it would seem as I sit in residence upon the throne, clumps of fossilized dung for primates like me to ponder.

Academic deliberations in the coolness of a desert morning prove much easier than digging on a narrow ledge in the 100 degree heat of a desert afternoon while keeping one eye on an overhang of mudstone split with a worrisome-looking series of erosive cracks. Nevertheless, our small party of five paleontological volunteers, guided by John Bird, excavation foreman for the College of Eastern Utahs Prehistoric Museum, did find dinosaur bones. They belonged to ankylosaurs — armored vegetarians with plates and spikes meant to deflect the appetites of predators like Allosaurus and Utahraptor. 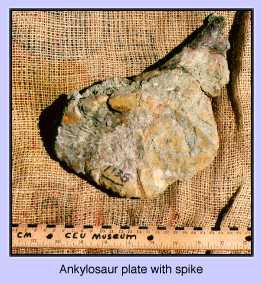 Our dinosaur quarry was famous for the first discovery of Utahraptor, thus making Stephen Spielberg, the creator of the movie Jurassic Park a prophet of sorts. Spielberg knew about velociraptors — vicious three-foot-long Mongolian predators with sickle-shaped leg claws admirably suited for evisceration. He wanted bigger stars to be the villains for his movie, however, and invented some. In 1989, Rob Gaston, a sculptor and part-time bone hunter, found their twenty-foot-long, real-life counterparts while motorcycling through the back-country of Utah. The fact that they were early Cretaceous in age, rather than Jurassic, was a minor flaw, since many other stars of the film, like T. rex, were Cretaceous dwellers as well.

We would have loved discovering raptor claws and skulls, but those are usually reserved for those who spend weeks, months, and years in the field, donating their sweat and passion in full-time chunks. Ankylosaur parts were exciting enough, especially when it took hours to free a vertebra from a layer of limestone and hours more to gently flake away mudstone from a stack of once-armor plates that now threatened to split apart with any false hammer strike. And once the sun cleared the mesa top about 10 a.m., my attention became divided between intellectual musings and paying attention to physical discomforts that could only be relieved by drinking gallons of water and crawling with my favorite lizard into any spot of shade available.

For hours we acted as agents of erosion, throwing hundreds of pounds of rock over a cliff, and quickly gained an appreciation of Deep Time, a phrase invented by the writer, John McPhee, to describe the time it takes to sculpt a planets geological features. How long does it take to be covered by mud, which is covered by sand and water and more mud hundreds of feet thick until everything is crushed and compressed to stone? In the case of these dinosaurs it took about 100 million years.

Since Ive now lived over a half a century, I can begin to comprehend what a 100 year interval is like. I have an outside chance of seeing my hundredth birthday. Facing the turn of a new millennium, I can vaguely grasp that a thousand years can be spanned by ten very long lifetimes. A hundred such long lifetimes could take us back to the beginnings of civilization and agriculture. But you would have to multiply that number by ten again to get back to the beginnings of our species and you would have to multiply that number by a thousand to comprehend the age of an ankylosaur who died near an ancient river whose mountain source has since been ground to dust and rubble.

If I started now and just counted to 100 million, one second per number, I could finish in three years.

So in the mornings, I sit lightly on the throne, knowing it has been rather hastily nailed together and that other creatures passed their time — and whatever else — on Earth for far longer. Some say the attraction of dinosaurs, especially for kids, is their magnificent size and power, but part of it — because of our self-centered human conceits — may be imagining exotic creatures who dominated an Earth where people had no role at all, and their ancestors were just good snack food. Remains of one of the brainiest dinosaurs — a small ancestor-eater called Troödon — have been found near my throne. If poor Troödon had had the time to experiment with more brain power and if hed survived the Big Disaster, I suspect I would enjoy having a beer with him and swapping philosophies on a warm, starry evening.

As it turned out, I enjoyed those very activities with my fellow quarrymen. One volunteer brought his own hand-made reflecting telescope and entertained us with views of all manner of heavenly bodies. Orange-banded Jupiter rose early in the east showing off four of his brightest moons. Saturn followed with an impressive halo of rings I hadnt seen through a telescope since my college days. These planets are near neighbors. You can reach Jupiter by rocket in several years or fly by light beam at 186,000 miles per second and make the trip in three quarters of an hour. Extend your trip another forty five minutes to reach Saturn.

By day, bedeviled by Deep Time. By night, bewildered by Deep Space.

The distances even to close stars is far more daunting. Mizar (and its fainter companion, Alcor) in the middle of the handle of the Big Dipper are 88 light years away. The image of them I enjoyed through the telescope started their journey when my father was five years old. If one of them explodes today my children (or perhaps grandchildren) will find out about it.

And we did see the remains of exploded stars, too. The Crab Nebula in Taurus, looking like a fourth of July cloud of gunpowder when the rocket flash is over, once flared brighter than Venus in the night sky of 1054 A.D. Chinese astronomers, as well as native Americans, duly recorded the event in court documents and on cave walls. Of course, it really exploded 6000 years before, but the light of the blast didnt reach Earth until then. The veil nebula in Cygnus looks like a feathery, broken smoke ring about 70 light years in diameter. Astronomers think its mother star blew up 40,000 years ago. 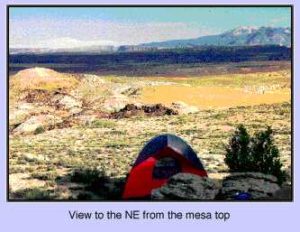 It would be nice to have a convivial chat with some alien intelligence and ask her what she thought of all this. Some people may tell you theyve had such discussions, but Im not convinced. Scientists have searched off and on for years for intelligent radio signals from space and have found nothing but radio beacons from burned-out star cores. The odds are stacked high against hearing messages from Deep Space. Its not that there arent plenty of stars with planets and probably plenty of planets with life and many with intelligent life as well. I suspect there are. A key element in the equation is how long might a technological society capable of — and interested in — sending signals survive. Timothy Ferris in The Minds Sky estimated that if such civilizations endured ten million years there might be 4000 thriving in our galaxy today. But if such civilizations only endured 10,000 years, there might be as few as four alive and transmitting.

Any aliens listening to us would first hear the news of Warren G. Hardings election to the presidency in 1920.

So, next morning after an evening of pondering, I sat taller on the throne, unchallenged king of all that I surveyed. But I was feeling a little lonely. I could read bones like tea leaves and make some pretty good guesstimates about life on Earth a hundred million years ago, but would never have a beer with an intelligent dinosaur. I could marvel at the last stars fading with the morning light, but be pretty sure, even if someone were looking back, they could never swim the gulf between us. With sufficient time and money, I suppose, I could possess and transform all that lay before me and turn it into Ypsilanti-like bathrooms where the walls were an unintimidating arms length away. Perhaps that, like my camp shovel, would provide some small degree of security from howling infinities.

I need the broad, unencumbered view to spark my pondering. And, for recycling purposes, I certainly need the efforts of the hard-working molds and bacteria who labor beneath the vulnerable but well-placed eminence on which I sit: a throne where the view is vast, but psychologically manageable, and my immediate duty, at least, is unambiguously clear.